Sass has been around for over 10 years now. It’s worth asking:

Is Sass worth learning going into 2020?

Is it still a relevant way to keep your CSS organized and write efficient stylesheets?

Let’s go through some valid objections to learning Sass to answer these questions:

In fact, some developers are opting to leave preprocessors all together and get back to writing vanilla CSS.

An example of CSS catching up with Sass is the introduction of CSS Variables.

It’s quite similar to the variables functionality in Sass, and is widely adopted across browsers:

Other functionality from Sass is also planned to move across to CSS in the coming months/years.

But the reality is that right now, many developers and plenty of organizations still rely on preprocessors like Sass.

Sass functionality like nesting (when used carefully), mixins & partials still provide value to front-end developers and are not (yet) supported in vanilla CSS.

That being said, can’t PostCSS help with those things?…

Over the past few years, PostCSS has grown quite a bit in popularity:

Although a little outdated, this shows the growth that PostCSS went through in 2017 relative to other CSS processing tools. Source: Logrocket

Some front-end developers have adopted PostCSS as a complete replacement to Sass (or other preprocessors).

So, what is PostCSS and how does it differ to Sass?

PostCSS is a tool that gives you access to a bunch of CSS related plugins to help improve your workflow and how you write CSS.

This means you start with a blank slate, and you can pick and choose the additional plugins you need.

That’s the biggest difference between Sass and PostCSS:

Sass comes with a whole bunch of functionality out of the box, even if you don’t need some of that functionality. PostCSS allows you to choose which functionality you’d like to add (and they have a pretty amazing choice of independently created plugins).

For example, let’s say you enjoy using the nesting functionality from Sass, but you’re not bothered about the other Sass functionality.

Well, once you’ve got PostCSS setup, you’d simply need to add the postcss-nested plugin and you’re off!

The data from Ashley Nolan’s recent CSS tooling survey paint an interesting picture on the usage of Sass vs PostCSS: 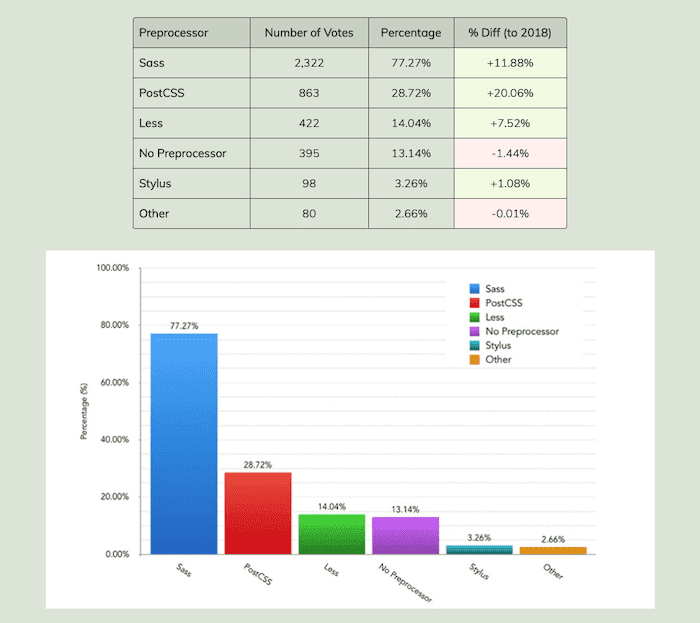 So clearly, Sass and PostCSS are both winners here.

That being said, their usage is not mutually exclusive.

In fact, many use both Sass and PostCSS in tandem, allowing them to keep using Sass and take advantage of PostCSS plugins to improve their workflow.

The barrier to entry for getting started and using Sass is lower than PostCSS, which is one of the reasons I imagine PostCSS hasn’t skyrocketed in usage over Sass.

“I only work on small websites. Do I need Sass?”

For small websites, it can be hard to rationalize using Sass.

For example, one of the features of Sass is using variables to define repeating values, like this:

Sure, it’s easy to see how this can save you time.

But in reality, for a sub-20 page website, updating colors on a website would only take you a couple of minutes in CSS.

That being said, don’t forget that Sass (SCSS) uses the same syntax as CSS.

Meaning that you can write CSS in a .scss (Sass) file and it will work the same as CSS (once it’s compiled. See more on the compilation setup below).

So think of Sass like a bolt-on to your CSS, giving you extra functionality.

But the barrier to trying Sass is much lower than you think. And once you’ve tried it, then you can make a judgment call.

To try Sass, you just need to know how to set up the compiler…

“I’ve avoided Sass because of the compiler”

If you’ve not used npm before or a task runner like gulp or grunt, the compiler can be a reason to shy away from getting started with Sass.

The reality is that if you want to use Sass in a professional workflow, you will need to address that fear and learn how to use package managers.

But what if I told you about a simpler way? If you wanted to just start writing some Sass and dive in?

Well, my friend, you’re in for a treat. Here’s what you can do (assuming you’re using Visual Studio Code):

Search for ‘sass’ inside the extensions tab of VS code and install the Live Sass Compiler extension: 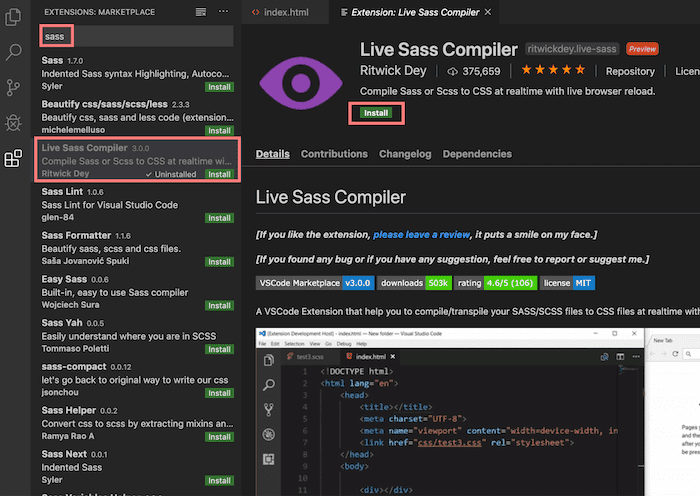 Create a .scss file and, with your .scss file open, press the ‘Watch Sass’ button at the bottom of your screen inside the horizontal blue bar: 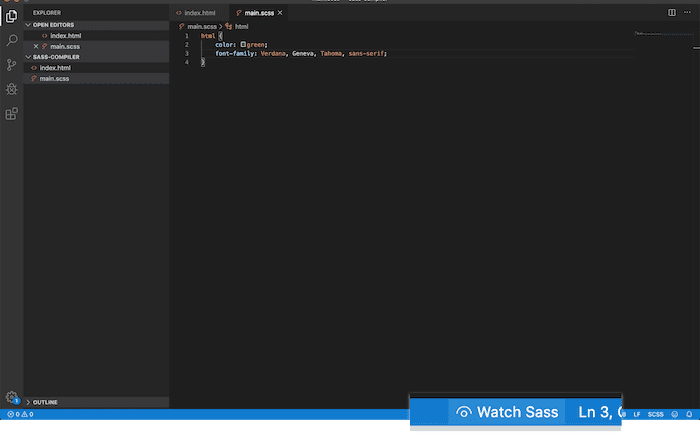 The compiler is now setup! Easy as that. You should see the compiled .css file within your files: 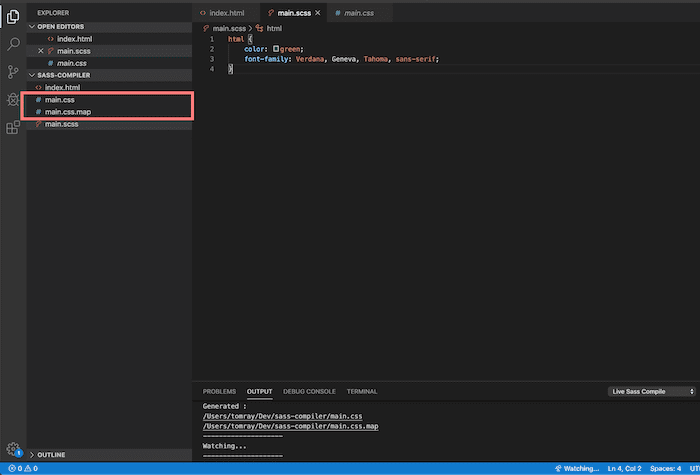 The final step is to link the compiled CSS file. So remember to link the .css file, not the .scss file: 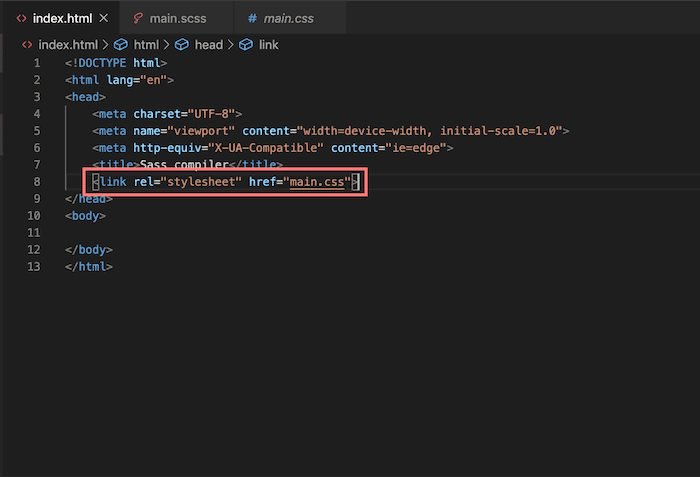 How do you know when your foundational CSS skills are strong enough to start learning Sass?

For example, declaring a style like this in CSS:

Is the same as declaring the style in SCSS:

The difference between Sassy Sass and CSS is that Sassy Sass requires a compiler and has additional syntax and functionality, like mixins and nesting.

So the question should be:

At what point should I learn Sass functionality like mixins & nesting?

Well, have you spent some time learning (and importantly practicing) fundamental concepts CSS like:

If you’ve got these topics covered, I think you should be brave and dive in:

The reality is that Sass is still being used commercially (and recreationally) by developers and organizations around the world.

How do I know this?

Well, the State of CSS 2019 survey results speak for itself: 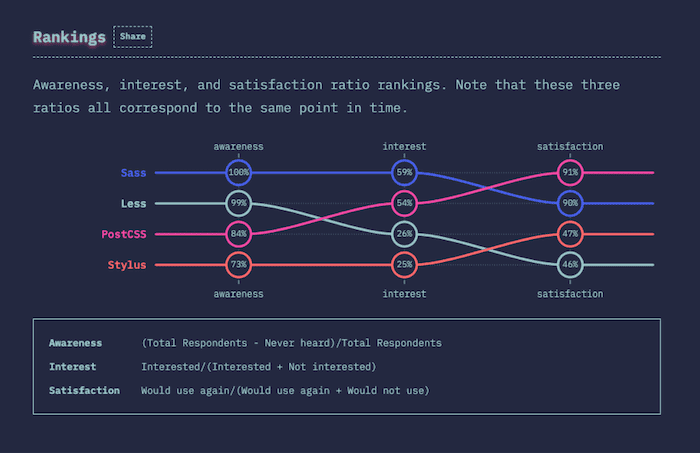 Sass has a high awareness and satisfaction across the front-end community. Source: State of CSS 2019

So, if you’re pondering whether or not to start learning Sass, I would encourage you to be brave and dive in.

I know. At first glance, Sass can look fairly overwhelming and complex.

But the barrier to entry is much lower than it seems. 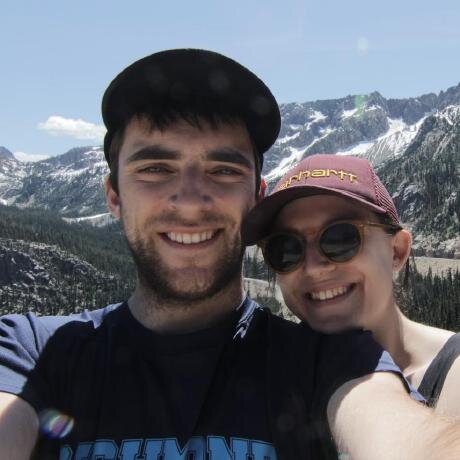 By Tom Ray, a front-end developer who lives in London with his fiancée and cat Arnold.